My piece from DP at OWS, ACAB 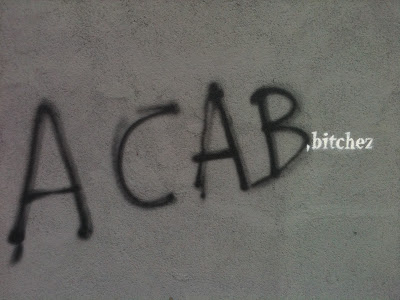 I just woke up to the news that the OWS encampment at Zuccotti Park was cleared out overnight by a bunch of violent thugs "just doing their jobs" (you know, the same thing loan sharks, poachers, and hitmen say). If recent events from around the world have shown us anything, its that these moments of naked state repression provide heightened popular support and therefore the opportunity to take the struggle to the next level. Thursday is a major day of action in NYC and around the world, so get out there.

11/16 edit: Despite initial reports from librarians and witnesses, we can now happily report that some, most, all (?) of the People's Library survived the raid, and despite being thrown into goddamned dump trucks, will be returned. You can follow the story on their blog.

ANYWAY, last week before all this bullshit, DP had the chance to host the 5th installment of our reading series at this wonderful little institution that I'm sure will be back on its feet in no time. Thanks to our readers Niina Pollari, Terence Degnan, Camilo Rolan, and Kate Cantrill. The People's Library lives on!


Below is the text I read. Feel free to circulate.

I Am The 99%
by Jarrod Shanahan

Hi, my name is Jarrod, and I am the 99%! I am the meeting place of a breathtaking variety of dreams, desires, and impulses. Many have sought to form me in their image, to set me on an orthodox path, and to lay out my future in meticulous detail. But at present, my image merely reflects the unreconciled diversity of these bodies and aims, and is accordingly amorphous and inchoate and awesomely awkward. I am the premise for an unlikely roommate comedy that will never get past the censors intact. Some forces within me are willing to analyze every situation in its nuanced detail until the opportunity for action has passed and they can secretly breathe a sigh of relief. Some forces are bored with the repetitive review of every minor scruple and compel me toward unreflective action, possibly to my peril. Some offer an impossible yardstick against which I must measure my behavior, while others are satisfied to just get me all worked up and see what happens. Some want one specific thing and they want it eventually, others want everything and they want it now. Some desire a five year plan as a practical necessity, others scorn a five minute plan as the death of spontaneity. Some are really into repeating verbatim everything said by those around them, while others are more aristocratic in their tastes. Some see only the individual case, others only the totality, and both are thusly impaired. Some secretly aspire to seize power over all others, while others live for nothing more than the day when they will shut these megalomaniacal aspirations down. Still more yearn for quiet, the cessation of conflict, sleep, peace, man. Like it or not, I am a multitude, dissonance and dissimilarity pump through my veins, and sooner or later I’ll just have to learn to roll with it. Only a theologian or fascist or worse would consider the absolute resolution of all of this tension possible, let alone forthcoming, in anything besides my own organic death. But I must strive nonetheless for tenuous working resolution, and reap the hard-wrought fruit of compromise in a series of cautiously bumbling, self-aware steps and missteps across an unmapped terrain. My style is one impatient with itself. Without centralized rule I must constantly battle high pitched emotions and implacable libidinal urges, seeking to keep unified a body so dissonant, and so spontaneous, and so tenuously held together in its very tissue that its coherence for a mere second in time is a complete and utter fucking miracle. Yet, I believe this horizontal organization to be my chief strength, with which I arm myself against docility, complacency, and laziness masquerading as mature pragmatism, all of which menace my meandering path toward the unprecedented. For I embody the contradictions of the world which gave birth to me, I give them breath and a physical form, the aesthetic of which has been debated on the Internet. And I have therefore chosen to give voice to the insanity and schitzophrenia of our rational world, a voice I offer in a mad gesture of desperation to hypothetical ears and against all odds, and must strain myself to shout in the face of sirens and snark and deafness and drumming.

I am short on sound bites when asked to account for myself, but this says nothing of the quality of my my own content. Instead, it implicates those who seek to parrot 144 words or less, tapping out transcripts like hung over court stenographers nodding their way half awake through a boring trial about taxes or finance something. If a self proclaimed analyst ever asks me to explain myself tersely and comprehensively, I will gladly do so in exchange for their analytical credentials. If only a meteorologist could ask the weather to explain itself! I am often accused of having few discernible goals save for the delusional and the utopian, but it is only by orienting myself toward the impossible that I will arrive at that which I can scarcely conceive of in my present state of consciousness, given the restrictions imposed upon me by my environment, upbringing, fears, desires, aversions, neuroses, vanities, fantasies, undeserved grandeur, and unwarranted self doubt. And what’s so wrong, anyway, with just compiling a big old list of things that I think suck and ought not to be? ...For starters, at least! When seeking to further discredit me, one may derisively point to my style of dress, my age, my educational background, my past behaviors, my employment situation or lack thereof, too much money in my bank account, too little money in my bank account, my deep rooted affinity with Bill Ayers, or perhaps my faintly foul odor, though this merely challenges me to force the discussion to the realm of ideas, where I have the high ground no matter how stupid my haircut or healthy my diet may be. And to clear the air, I begrudgingly acknowledge a very minor and marginal problem with substance abuse, which is pretty much under control and I’m trying to enforce the rule I have in place against it, so give me a break OK? Likewise, while acknowledging that my willingness to hang out with just about anybody has brought me, shall I say mixed results, I overall consider it a necessary first principle, though one which I must implement with discretion and be sure to never deprive myself of the ability to say “OK dude, you gotta go”. In short, I was once easily dismissed but that seems to be changing fast, and like it or not, I’m not going anywhere.

And of course I’m anxious to see how my history will play itself out, how I will develop and adapt, how my enemies will respond when they can no longer mock or ignore, whether I’ll squander my energy foolishly, or whether I’ll achieve the impossible. But this story will not play out today or tomorrow or the day after. I must not attempt to force the harvest of history by picking its unripe fruit. I must not mistake the morning I open my eyes on the possibility of a new day for the new day itself. For now and for now on I must work on myself with godlike patience and a sense of humor still more divine, keeping the rowdy kids in check, keeping the squares from making me square, telling the reactionaries to join me if they like but otherwise to go fuck themselves, and doing my thing, my own special way, like I did to get to where I am today. I am the 99%!

Posted by DEATH PANEL PRESS at 5:38 AM